The human body is a prison-cell. A dungeon. Made of skin, and flesh, and bone, and shit. - It's an ugly thing. Hideous.

Being a gothic fairy, born of sheer fabulousness, I might occasionally decorate its walls with flowers, pictures and/or shiny things … - but the rest of the time I rather just sit in one corner, trying to ignore the misery of it all … while my mind usually does its best to wander off to other spheres ... 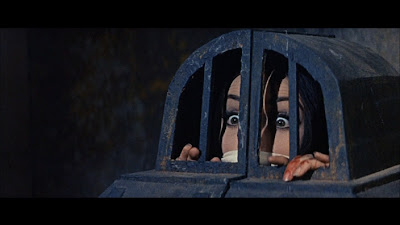 … because today my sis finally decided it was the perfect time to do one of her HOT IRON® workouts with me. Actually, she had announced her wickedly perverted idea the week before already, and ever since then I had been preparing myself for the challenge … - mentally, that is.
In fact, in an unexpected comatose state of chocolate-induced daydreaming, I had already begun to picture myself as the Jane Fonda of the gothic underground. Naturally, with my very own DVD fitness guide (also available as a nicely illustrated hardcover/paperback edition):
+ + + + + + + + + + + + + + + + + + + + + +
Auntie VaVa's
"Gothique Aerobics"
(Elegiac crunches to depressive music)
+ + + + + + + + + + + + + + + + + + + + + +
The cover would show dear AVC in a super hot (and only slightly photoshopped) black catsuit with silver horizontal stripes (because Jane Cantodea can pull this off anytime!) and a pair of trendy, self-made 80s legwarmers of the gentlest violet. For this shot, she would be posing in her very own studio, which - of course - is in an old attic with squeaky (yet polished!) ebony floorboards, an enormous round window of beautifully ornamented stained-glass at its north-end, with a black barre in front of it.
I was ready!
However, when my sis finally showed up today, carrying a variety of irons and a hideous bodystep, I was seriously beginning to doubt this whole idea. What was I thinking? The last time I had moved any muscle was more than … well, 55 years ago (or that's how it feels, anyway) ... - and for a good reason!

When she hit the play-button of her boombox, the first sound coming from the speakers was the sombre toll of a dark churchbell … and I thought:
"YESSS, I can do this! Bring it on!"
But then it all went ooontz-ooontz-ooontz … and after the mere warm-up, I basically … umm … fainted.

Hey, what did you expect?! I'm Goth, after all.
There is only a certain amount of … irony …  that my system call tolerate.
Posted by Anna-Varney Cantodea at 2:54 AM